The Fords Are Ready

.. The reproduction White Motors Convertible Touring Sedans are ready for business. They are staged, for the moment at Mammoth, and ready for service as tour buses for park visitors.
.. At a reported cost of $250,000 each, Xanterra Parks and Resorts has fulfilled one of their contract obligations by teaming up with Ford Motor company to bring this fleet of 11 (8 were recently purchased by the park concessionaire,) coaches back into service.
.. The reproductions are modeled after the 1936 White Motors Convertible Limousine and are a creditable rendition of the originals.
.. The power train, running gear, and front sheet metal are reproduced, and the dashboard and gauges and steering wheel are all modern. They look old and run new.

.. There are some original 1936 White Limousine's still in service and in private hands. The West Yellowstone Historic Center has a restored original that it uses to give tours in the Summertime. The Museum's vehicle, (#437,) has undergone a complete restoration - where necessary- and still sports it's original upholstery and other components, including the original grill badge and gauges. 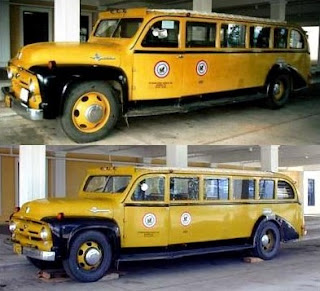 .. The interesting aspect of these vehicles is that the custom-built coach was the important part; not the sheet metal on the front. Many of the coaches were updated in the 1950's with 'modern' Ford engines and sheet metal back then. These 1950's conversions are rare but are known to exist, and are shown here.
----------------
.. Brief History: of all the Cleveland-based auto manufacturers, the longest-lived company was White Motor, which got its start with steam-powered cars, but became one of the main truck manufacturers in America.
.. The White Motor company was started by Thomas White but this 100+ year old company did not start by building automobiles. In 1876 Thomas White moved from Massachusetts to Cleveland where new markets were opening up for sewing machines. By the 1890s, the company was a national distributor of ‘sewing machines.’
.. In 1890 the bicycle craze swept the nation and White hopped right on. White thought he was on the cutting edge of transportation until the automobile popped up. This new horseless carriage fascinated Thomas White's sons Windsor and Rollin and they convinced their father that automobiles were something to invest in and create.
.. Rollin was an excellent engineer and after studying various automobiles he redesigned the boiler used on steam-powered cars which were quite popular in the early days. He developed a flash boiler that was safer than existing boilers and allowed the automobile's engine to produce steam faster than a traditional steam engine.
.. It was not difficult for the production lines at the White plant to produce the components necessary for automobiles and they began building steam powered automobiles. In 1899, the brothers introduced their first steam-powered automobile, followed by a small delivery truck. The company quickly acquired a reputation for crafting quality vehicles and the Automobile Department was split off as The White Motor Car Company.
.. White Sewing Machine continued to focus on its product line, and the new car company moved out, building a factory on Cleveland's eastern edge. Soon the steam-powered car was replaced with the gasoline-powered car, as White quickly adapted, continuing to build expensive, high-quality cars and light trucks. During World War One the White Motor Co. fashioned trucks for the United States military and abroad.
.. Czar Nicholas of Imperial Russia purchased an entire fleet of White-built trucks, making White an international name. In the 1930’s the White Motor Co. entered the great depression in a bad way. After a series of major setbacks Robert Black was appointed the new president of the White Motor Co. in 1935 and the White 'Touring Sedans' and 'Touring Limousines' were born.

.. The National Park Service worked up a program for production of canvas-topped 'touring sedans' to provide a special 'multi-sensory experience' for visitors sightseeing in the National Parks.The White Motor Company designed and built 500 of these 25-foot-long touring sedans. That was a fairly large production run of a unique vehicle and most of the buses were retired from service in the 1950s.
.. These vehicles were used in various western national parks including Bryce Canyon, Glacier, Grand Canyon, Mt. Rainier, Yellowstone, Yosemite, and Zion National Parks. While the canvas-topped tour sedans were replaced elsewhere, the fleet of (red) sedans at Glacier National Park was maintained in continuous service. These sedans were ideal for trips across the Going-to-the-Sun Road. The open-air tour sedan afforded visitors a unique experience as they rolled across the Continental Divide.
.. You Can read the straight news story in the Casper Star Tribune.
Posted by Yellowstoner at Sunday, May 27, 2007