FIRST BIG FIRE
Coordinated by USFS
the elk are happy 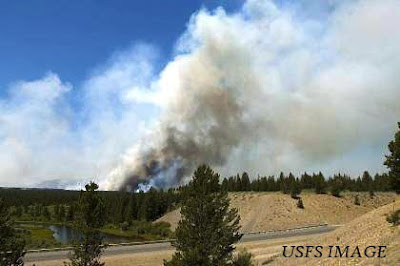 .. The news wires and the blogs are all atwitter with the news of the Madison Arm Fire. Rightly so, if you are a wildfire fan. The fire is currently about 10% controlled. You can follow the progress at the Incident Information System Web Portal (InciWeb.) Updates are posted as the incident commander sees fit; usually every four hours or so, depending on the situation.
.. There are maps and other details about this and other incidents throughout the nation, (including prescribed burns.) The site is an excellent resource for those folks in areas where wildfires are a regular occurrence - we use it frequently.
.. The fire has been ascribed to "probable human activity." That makes sense since there has been no rain or thunder for a week or so. The investigators are on scene.
.. One thing not reported in the media has been the relationship between the aggressive stance of the Gallatin National Forest in closing forest roads and the problems of early access to small fires. The West Yellowstone town meeting produced a heated exchange between some community members and the fire officials.
.. There is still some confusion about what constitutes "official notification" of a fire, the exact time of the notification, and the response made to the notification. Some community members have opined that they reported the fire as early as 9:30 or 10:00 AM. The "official report of a fire" is listed at 1:00 PM.
.. All involved parties acknowledge the difficulties of "finding the fire" and gaining motorized access. You can bet that this will become more of an issue if the fire reaches into Yellowstone National Park. 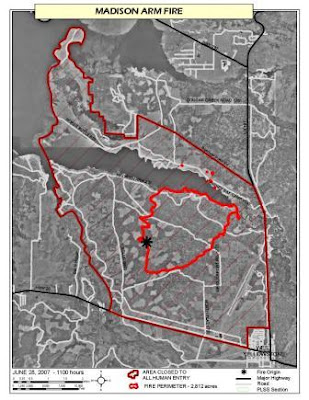 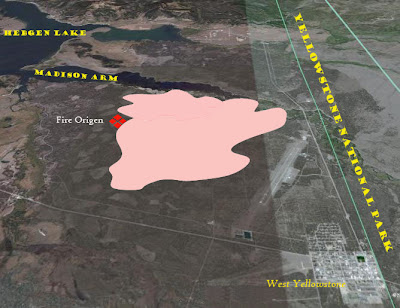 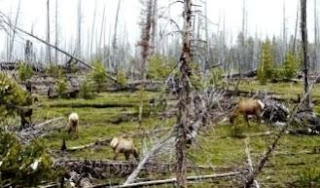 .. One notable thing that happens when a mature lodgepole forest burns is the production of forage and habitat for species that could not live in a forest.
.. After the 1988 fires in Yellowstone a curious feeding behavior was noticed in the Madison Elk Herd (PDF.) 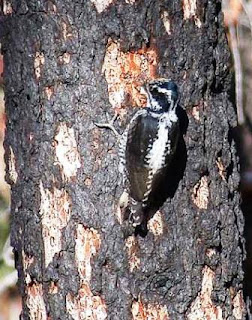 Charcoal from the burned bark was being consumed by the elk in quantities never before observed. It's an interesting story.
.. Of course the additional light also lets grasses and forbs proliferate. This makes the elk even happier: - elk hunters too, since the burned area is in the out migration route for part of the Madison Herd.
.. Additionally, the Three Toed Woodpecker is happy. So are voles, squirrels, wildflower photographers, and salvage timber operators. We look forward to seeing how this affects the attitudes of those folks that weren't here in the aftermath of the 1988 fires.
Posted by Yellowstoner at Friday, June 29, 2007 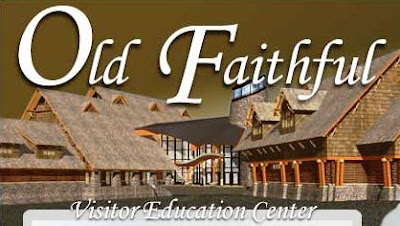 +++++++++++++++++++
.. Just a few places that you may not have seen because you tried to explore the official web site through conventional channels:
-- Old Faithful Visitor Education Center,
-- Videos Of Upper Geyser Basin,
-- YNP Offers Fly Fishing Program For Women
-- Anatomy of a Cone Geyser,
-- Yellowstone Fisheries Fund,
-- Artist Sketches of spaces in Proposed Old Faithful Visitor Education Center,
.. These are just a few of the "official" but hidden spaces on the "official" YNP Web Page. More to come.
.. By the way, here's what the visitor center looks like right now. 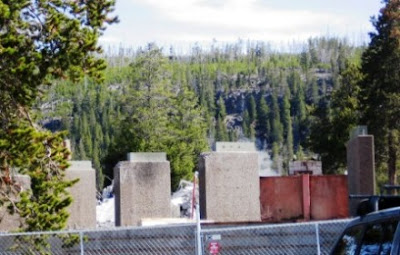 THIS IS A VERY DRY YEAR

.
.. Just a note to let you know how dry it is. Al Nash, Yellowstone National Park spokesperson, is quoted in the Billings Gazette as saying:

.. "The conditions were more dramatic than anyone had faced, there was no current knowledge on the part of the people fighting the fire," he said. "And we were overconfident."

.. "Although rain has greened the hillsides of the Gallatin National Forest, it has done little to relieve the parched condition of large fuels. The concern now is that the tall grasses nourished by spring rains will dry out and cure into tinder for summer fires." 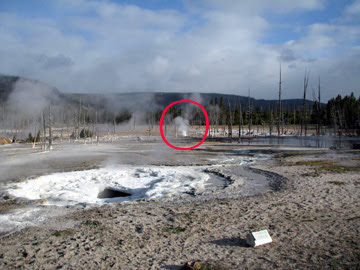 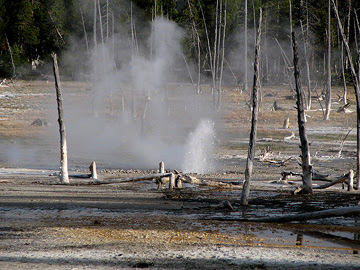 NOT YOUR EVERYDAY ATTRACTION

.. After a rocky start to the year the Heritage & Research Center in Yellowstone is now open to the public.
.. The facility is not a "Tourist Attraction" per se, but it is accessible to the public. 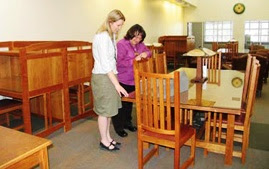 Primarily a library, an archive and artifact storage facility, and staff offices, the HRC is also home to the archeology labs and herbarium.
.. It houses almost 3,000 linear feet of historic records, 90,000 photographic prints and negatives, 20,000 books and manuscripts, 300,000 cultural and natural science specimens, over 35,000 archeological artifacts and approximately 10,000 plant specimens.
.. The facility is open, Monday – Friday, 8am-5pm and closed weekends and federal holidays.
.. Library Hours: Tuesday-Friday 9-4pm.
.. Archives and Museum Collections: by appointment only.
.. There are some reservation and research requirements should you desire to use the research collections, archives, or some of the library resources.
.. For access:
- Museum Collection
- Archives
- Research Library
- Historian
Posted by Yellowstoner at Friday, June 08, 2007 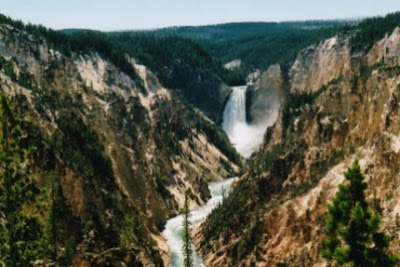 .. The continuous road repair and construction in Yellowstone National Park will impact the South Rim Drive to make improvements at Artist Point.
.. Plan to view the Lower Falls from this overlook in the next month.
Posted by Yellowstoner at Wednesday, June 06, 2007

SOME NEW NEWS & SOME OLD NEWS
increased access to information

.. The continual upgrading of Yellowstone's Web site has reached the point of maturity. One excellent section, "PHOTOS & MULTIMEDIA," was updated last week to include some new and some old content.
.. Here are some changes and additions:
INSIDE YELLOWSTONE, short videos on park features and processes,
YELLOWSTONE IN DEPTH, longer video features,
YELLOWSTONE RESOURCE WORKSHOP - 2005, video of this meeting ans sessions,
WILDLIFE SAFETY VIDEO, shows elk goring visitor,
THIS SEASON IN YELLOWSTONE, changed from this month in Yellowstone, now discontinued - photos,
GUIDE TO ONLINE VIDEOS, long list of topics and images,
WHAT'S NEW, finally a way to keep updated,
And the ever popular ROAD CONSTRUCTION DELAYS & CLOSURES.
.. One useful addition that was added a couple of months ago is the PUBLICATIONS page. Many of the longer documents are in PDF but this resource is valuable for those wanting some in-depth insights into the topics covered. An interesting publication from this page is the Superintendents Compendium (that lists the special designations, closures, public use limits, permit requirements and other restrictions imposed under the discretionary authority of the Superintendent.)
-------------------
.. It looks like Yellowstone National Park is going to "officially" ignore the return of the yellow buses in it's press releases. Well, we found out anyway.
Posted by Yellowstoner at Monday, June 04, 2007 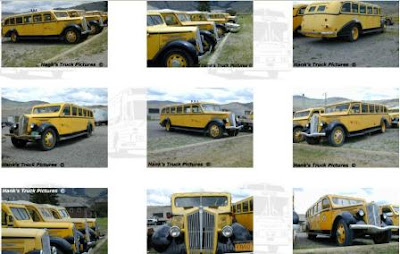