IT'S HIT THE FAN 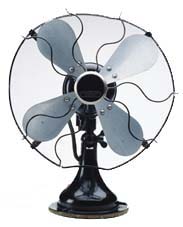 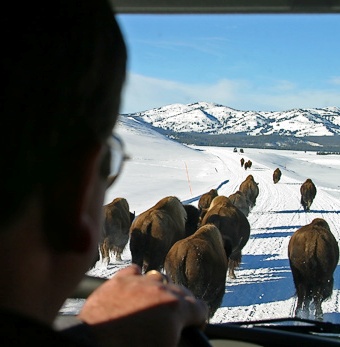 .. Well the continuing debate is heating up. Yellowstone National Park has just released the Draft Winter Use Environmental Impact Statement. And it would seem that, (on first blush,) the snowmobile is the way to go. However, it's not that simple. If you intend to address this debate there is a wealth of information to digest before you jump into the fray. And it's not just about snowmobiles.

.. It's about the visitor experience. It's about the bison. It's about "BAT" (Best Available Technology.) And, it's about the future of the resource preservation in Yellowstone.
.. Unless you let others speak for you, (usually a very bad idea,) you will need the following for minimal information.
DEBATE RESOURCES:
Draft EIS,
Ecology Of Bison Movements.
Winter Use Technical Documents,
Winter Air Quality Summary,
The Yellowstone Geoecosystem. 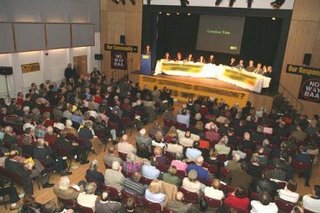 .. These will get you started. There are facts and figures and results that are seldom discussed and paint a far more complex picture than the simple minded debate about snowmobiles only. There are going to be public meetings that require your attendance. There will be comments to be made. and, there are letters to be written.
.. It is important to understand the complete process and the available facts before you begin to participate. One of the crucial elements of evaluating public comments is if they are specific and address the known facts. Just the simple concern about pollution is not enough. Just the simple complaint against snowmobiles is not enough.
.. This is why the public sentiment and many comments are not viewed as a vote. They are usually ill informed and express emotional sentiments instead of reasoned arguments. We should have learned, as children, that we don't usually get our own way by just crying. And despite their own feelings, the NPS staff must confront the data and not just the crying. 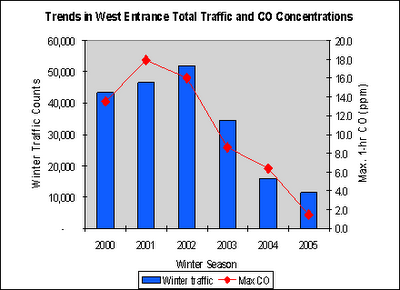 .. Here are some things to keep in mind as you join the battle to save the multiple resources that comprise the wonderland of Yellowstone.
---- "Winter monitoring data from two locations in the park show that under the current Winter Use Plan, air quality has improved; concentrations of both carbon monoxide and particulate matter have decreased considerably."(LINK) 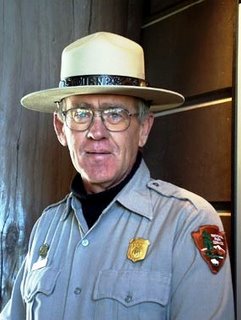 ---- "The reduction in snowmobile traffic is the primary reason for improvements in air quality, but the cleaner 4-stroke engines that are now required and weather have also played a role."(LINK)
---- "As snowmobiles have gotten cleaner, the emissions from the snowcoaches have come under closer scrutiny. Direct measurements of snowcoach emissions by the University of Denver have shown that on a per-passenger basis the average emissions from snowcoaches are about the same as the cleaner 4-stroke engine snowmobiles."(LINK) 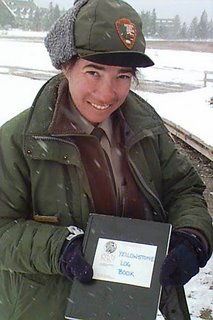 ---- "There have been no studies done on the effects of vehicle noise on the passengers of snow coaches. -- Not the vans, not the Bombardiers, not the buses."
---- "In one study, samples taken from the on-road snowpack near West Yellowstone, the most heavily traveled snowmobile route into the park, contained several varieties of PAHs and VOCs known to be major ingredients in two-stroke engine lubricants. Samples taken in Gallatin Canyon where there is car traffic but no snowmobiles did not contain these compounds."(LINK)
---- "Although the park proposes a total of 720 snowmobile/day be granted entrance, it should be noted that seldom does the number reach 300/day." (260/day is the average)
---- "At the present time, there are two relatively separate subpopulations [of bison], one on the Northern Range and the other on the Central Range. Some exchange occurs via the Mirror Plateau. In recent years, there have been major migrations from the Central Range to Gardiner basin via the road allowance between Madison Junction and Swan Lake Flats. This migratory pattern would not likely have developed in the absence of the groomed road through the Gibbon Canyon."(LINK)

.."Ultimately, the fundamental question is this: Is the park a place which is meant to “conserve the scenery and the natural and historic objects and the wild life therein,” as stated in the Organic Act of 1916, or is it “a public park or pleasuring ground for the benefit and enjoyment of the people," as stated in the 1872 dedication of Yellowstone as the world's first national park?"(LINK)
. 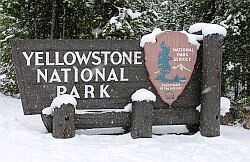 Posted by Yellowstoner at Tuesday, November 21, 2006

Much Ado About Something

SNOWMOBILES - THE ONLY PROBLEM? 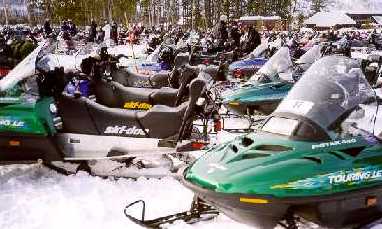 .................
.. Well it seems that it didn't take long for the snowmobile issue to hit the news and the blogs. Once the snow flies, the discussion, (argument?) continues. We notice that the Coalition of National Park Service Retirees has jumped into the lead on reviewing the latest reports to come from the National Park Service.
.. The National Parks Traveler has an excellent synopsis of the goings-on, as does the CNPSR Air Quality Press Release.
.. The air quality reports that are causing the stir are available at the Yellowstone Winter Use Documents page. It's worth requesting the large data files for the air quality modeling report.
.. The reports show a mixed bag of results that the combatants can point to with grins. However we discovered a blog that suggests that much of the wailing and screaming is just a cover-up for additional commercialization of Yellowstone.

.. We noted a few posts back that the distaff blog, A Step Apart was commenting on things Yellowstone. One thing that she notes is that all arguments stem from the, (not necessarily valid,) assumption that riding over the snow is necessary to a Yellowstone Winter experience.
.. Her blog has a series of posts that look not just at snowmobiles as a problem, but also at the rampant commercialization that Yellowstone is experiencing in the winter. Some of the posts have provocative titles, (e.g. The Testosterone Blogger, and The Sins Of Snowmobiles,) others are rather mundane. The series seems to be without end - stay tuned.
------------- 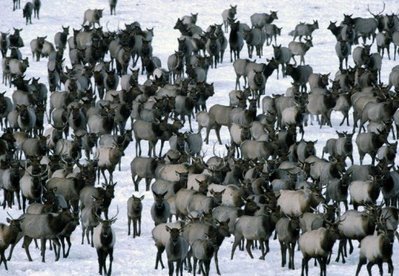 .. A couple of suspected outlaws have been caught and are awaiting trial for poaching an elk on Yellowstone's northern range.
.. The skimpy Yellowstone Park News Release gives little to go on for the moment. Nothing has been released since the pair's arraignment.
.. Every year poaching is a problem. It includes collecting antlers, and skeletal remains as well as killing animals.
-------------
.. We are pleased to report that the YELLOWSTONE NEWSPAPER is back in action. The revised format provides an excellent source for all things Yellowstone. The energy of this site is greatly appreciated. There is also a forum - it's in it's early stages; post your comments there. Thanks, Jim.
. 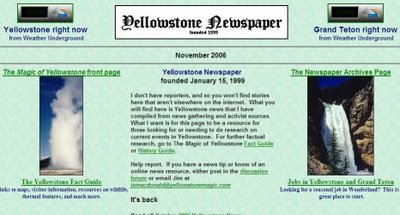 Bison & Snowmobiles In The News

____________________
.. With the advent of winter in Yellowstone Country there is one guarantee: news stories of Bison and Snowmobiles will appear as rapidly as acorns dropping from a tree. The droppings have started early this year. 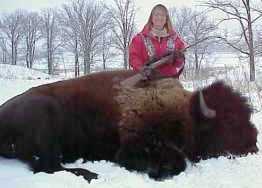 .. The Montana Bison Hunt opens on Wednesday. Although the state has issued 140 tags, the hunt will not, (even if all 140 are filled,) significantly affect the herd. The bison have returned from last years thinning and control efforts to the point where there are more now than the year before.
.. Recent figures show that snowmobile visitation in Yellowstone is down. With a cap of 720 sleds/day - the park is seeing only about 250/day. There is no clear explanation for the drop as noted in an article in the Star Tribune. This was also mentioned in New West.
.. The debate about snowmobiles started early this year. Several blogs and op-ed pieces have already hit the electronic media. Look for CNN to jump on the band wagon soon.
--- Yellowstone Newspaper has a synopsis of the stories,
--- So does Yellowstone Newspaper Briefs,
--- Several opinion pieces have appeared in "A Step Apart," a West Yellowstone Blog:
Honesty in Snowmobile Debate, The Testosterone Bloggers, YELLOWSTONE - A Commercial Wonderland, I Whine Therefore I'm Right. The pictures painted by the author of this blog are not pretty in terms of the long-term visitor experience.
--- The recent changes in Washington, D.C. have been commented on by Jim Macdonald in his blog "Jim's Eclectic World." Check the post entitled "No Radical New Wind In Yellowstone."
_______________________________ 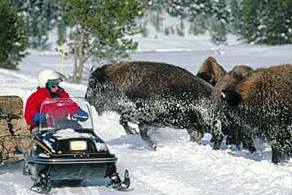 Posted by Yellowstoner at Monday, November 13, 2006 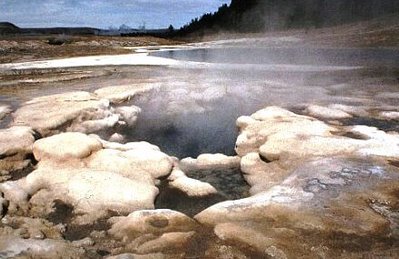 LYNX GET THEIR OWN SPACE, (but not in Yellowstone) 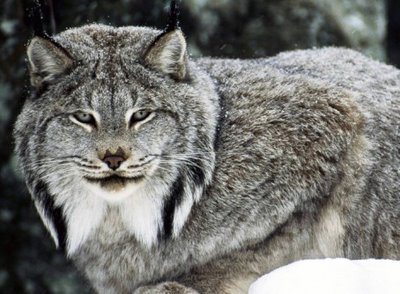 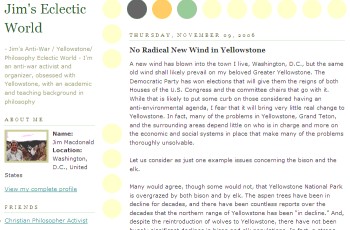 The Distaff Side Of Yellowstone 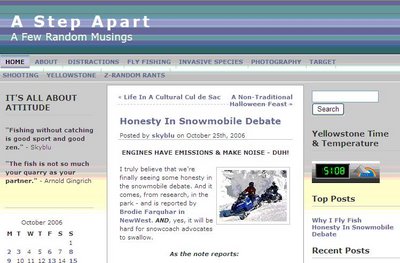 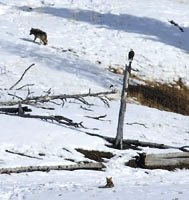 Posted by Yellowstoner at Sunday, November 12, 2006

IT'S BUSY IN YELLOWSTONE 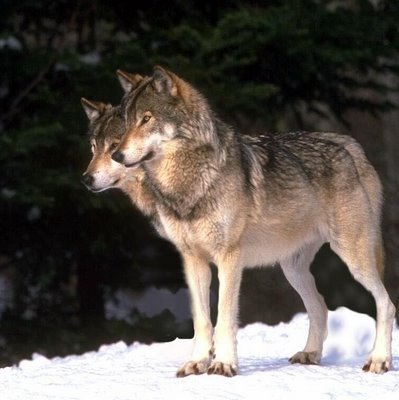 IS THERE A LAND BOOM AROUND YELLOWSTONE?
.. Are ranches becoming weekend retreats?
.. Can you fish where your dad did?
.. Too many fences?
.. Where are the cattle?
.. Is a scenic ranch good for the environment?
.. Find out HERE. Or, get more scary news HERE.

YELLOWSTONE WILDLIFE
.. Want to Kill an elk? Try this site.
.. Want to know about wildlife disease in Yellowstone? Try this one. 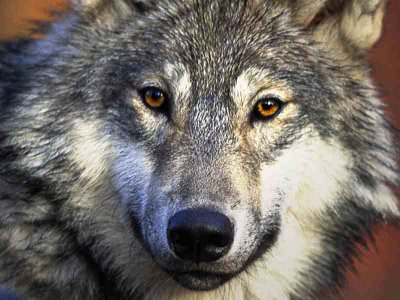 Posted by Yellowstoner at Thursday, November 02, 2006