SNOWMOBILE UPDATE
-- Exceptional post by Neo Commons: YELLOWSTONE: A QUIET LANDSCAPE ?
-- Another by: The Retread Ranger Station: STILL ON THE ENEMIES LIST, I GUESS.
. 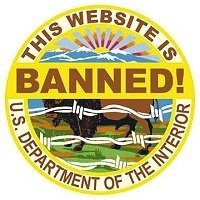 IT'S NOT HERE YET
be informed
plan ahead
-- We noticed an interesting post in a blog entitled "The Testosterone Bloggers" and had to visit the site. The site "A STEP APART" relates to many topics about Yellowstone.
-- An interesting perspective arises from perusing several pages on the site: 1.) there is abundant, (mostly justified,) negativity surrounding the use of snowmobiles in Yellowstone National Park, 2.) there is little effort spent in addressing the underlying problems with the machines, 3.) there is poor understanding about safety of travel in obsolete conveyances, 4.) and there is little if any conversation about the issues. 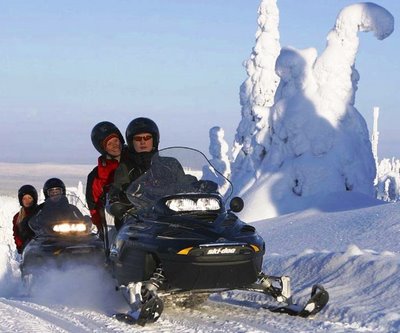 -- The history of Snowmobiles in Yellowstone is detailed at the site, and a brief note suggests that plowing the roads would be advantageous to both Yellowstone and the public. Some notes are started in what looks to be an exhaustive history of transportation in Yellowstone National Park.
-- The reading convinced us that it might be time to address the real possibility that, in the future, there will be a personal over-the-snow conveyance that is cleaner, quieter, less intrusive, safer, and more economical than the mass transportation used by commercial interests. Should this become reality, the rage against the machine named 'snowmobile' will have to be reassessed.

-- Bicycles were reviled when they first entered Yellowstone, so too were automobiles. Neither were banned. Problems were addressed: solutions and accommodations were reached. 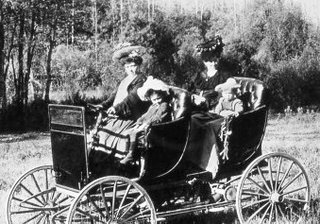 -- Today, tour buses spew noxious fumes, smog accumulates, and snowmobiles intrude on the winterscape. All are problems, and all need to be addressed.
-- Banning tour buses is not a solution that is contemplated very seriously. 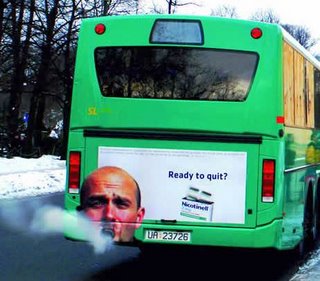 Banning automobiles is not considered either.
-- If snowmobiles cannot meet sound, safety, and emissions standards then they should not be allowed into the park - BUT if the standards can be met they should be treated as any other vehicle.
-- Automobiles today are cleaner and safer than they were 50 years ago. Even diesel belching buses in good repair are are cleaner than in the past.
-- It's time to direct the conversation about "snowmobiles" to the problems that they cause. And, it's time to understand that technology can make a difference. Safety of all winter travel has been neglected by the arguments against the snowmobile. There are many safety issues that obsolete conveyances pose. Jumping to the commercial solution may pose more problems than it solves.
-- There are several employees in the planning department at Yellowstone National Park that envision solutions other than banning snowmobiles. Plowing the roads can be a viable solution. Establishing, (and enforcing,) standards for safety, noise, pollution and intrusion, can and should be developed for all winter vehicular travel.
-- A recent article in the West Yellowstone News detailed the interesting history of plowing roads in the winter. It has been successfully implemented in the past. It is an option in the upcoming winter use plan. Plowing is a viable option and one that has been lost in the debate about snowmobiles.
-- The issue should be how to provide safe, non-intrusive access to Yellowstone National Park in the winter, and still protect the park - not just about banning snowmobiles.
READ MORE:
Wilderness Society
National Parks Traveler
MONTANA: Snow machines in the gardens
Posted by Yellowstoner at Monday, October 23, 2006 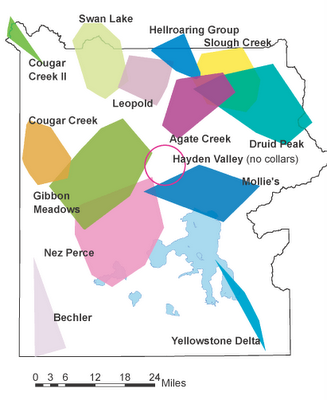 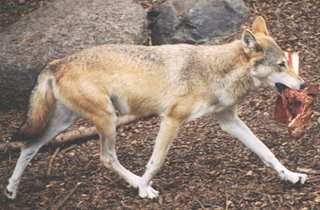 Posted by Yellowstoner at Sunday, October 15, 2006

The Best Time For Yellowstone 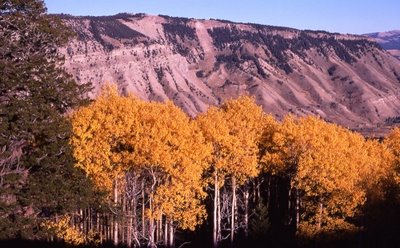 -- The official Yellowstone 'end of season' press release has a maudlin tone that suggests that the Yellowstone Experience has ended with the closing of trinket shops, gas stations, hotels, dining rooms, and the other non-wilderness accoutrement's of the park. Sad if you want your park on a platter. Less sad if you enjoy the place without traffic jams, idiot bicyclists, and waiting at an entrance station for the tour buses to get counted. 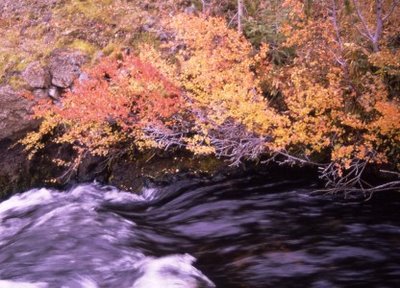 -- The road closure schedule is found HERE. A guide for winter planning is found HERE. It's good to plan ahead.
-- The continuing saga of elk escaping from game farms continues. A second escapee from a private hunting preserve in Idaho has caused some real soul searching. The intermarriage of 'hunting' elk and 'park' elk poses some concern about mixed up genes. It seems that domesticated parks and domesticated hunting is the National Trend. You can read about it in the Helena Independent Record.
-- A reevaluation of avalanche control has been completed and Yellowstone will change it's operating strategy for this procedure. As we noted previously, artillery is dangerous because of the residual unexploded shells. Controversy surrounds the new plan, and some see it as just one more example of GOVERNMENT PORK, in a time of dwindling budgets - according to the Missoulian. The AP story is rather straight forward, and the Helena Independent Record seems to favor it.

-- Back in May we reported on the Yellowstone Wolverine Study. It now seems that the little rascals may be getting a thorough review for listing as endangered. So little is known about these secretive animals that even counting them is difficult. The Lee News Service has an interesting article about the current state of affairs. 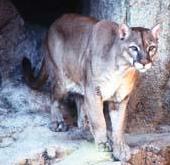 -- An encapsulated note in the Montana Standard details the status of large predators in our region. The perspective is interesting because it points out the amount of space needed for these animals. Most apropos of the topic is the fact that the population of the United States will reach 300,000,000 by sometime on Tuesday. This places us in third place - right behind China and India - "GO BREEDERS!"
Posted by Yellowstoner at Saturday, October 14, 2006 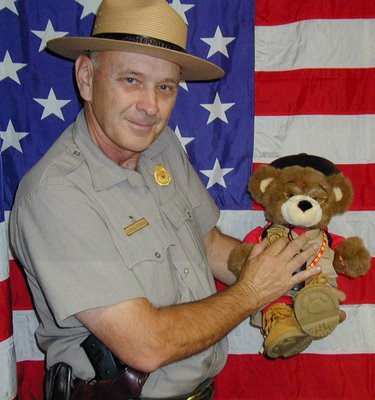 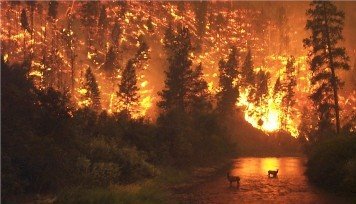 -The National Park Service, in general, and Yellowstone National Park, in particular, have failed in one of their most important missions: EDUCATION. Specifically education about the parks and their origins, and their reasons for existence. 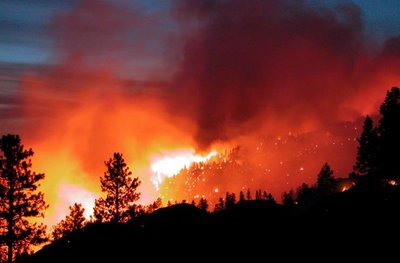 - Popular, idiomatic speech, has clouded their thinking. Bribes from 'do-gooding' rich folks have twisted their priorities. Management by litigation has destroyed their perspective. 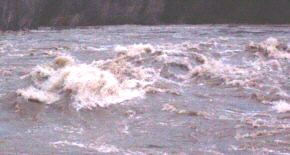 - The very vocabulary of the popular press, (Newspapers, TV, Weblogs, etc.) includes such words as tragedy, disaster, rampage, etc. when referring to the natural processes that are, (and have been,) responsible for the very parks that we call wonders. 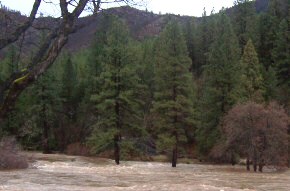 - Fires, Floods, Glaciations, Erosion, Earthquakes, and the whole complement of natural processes that produce the parks are decried as terrible occurrences by the public - and sadly by the NPS & Yellowstone, as well.
- The tragedy is that the public believes that Roads, Fancy Hotels, 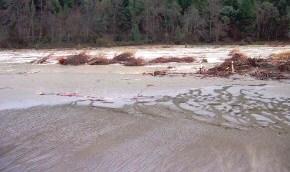 Visitor Centers, Trinket Shops, RV Parks, Yacht Marinas, and the rest of the built environment is what the parks are about - and - these things are perceived as equally important as the natural features of the parks.

- It seems impossible, (in the popular mind,) to separate a stay at the Old Faithful Inn from a perfect visit to Yellowstone. The same can be said for other parks such as Yosemite. Yet, truth be told, these ephemeral structures will be long gone while the wonders of these places continue to change and evolve.
- Education of the public is mandatory if the NPS is going to get it's house in order. Money is tight and promises to get tighter. Visitation is down and promises to fall even more. Infrastructure is rotting and crumbling - so much the better; get rid of it. 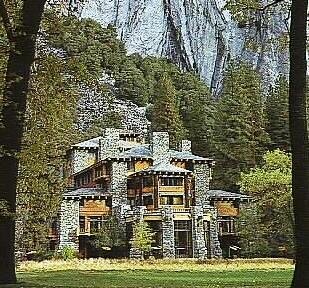 .. The parks are not about weekend revels in a $70,000.oo motor home. They are not about the sumptuous meals at a given dining room. They are not about palatial surroundings in historic buildings. They are about the way that the natural world has conspired to produce beauty and majesty.
- The blinders worn by do-gooders allow them to believe that edifices are somehow comparable to the surroundings - get real. Fire must be suppressed, (or it might destroy a fancy old building,) rivers must be returned to their beds, (or they might destroy roads,) hot spring run-off must be diverted, (or it'll cover up a structure built in the 50's.) This attitude is called NIMP - Not In My Park. It's endemic in the popular mind, and growing in the NPS. Let nature take it's course elsewhere but - NIMP! 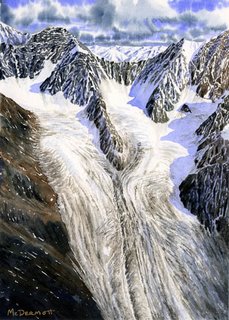 - Fires, Floods, Glaciations, Wind, Rain, Sun, Run-Off, Explosions, Poison Gas, etc. should be celebrated. There is no way to curtail these forces and in the same breath call the parks "wilderness," "natural," or "wild." The corollary attitude is that since we protect the elk and bison to the point of danger, we should also protect every tree.
- The public wants Disney World! The NPS, ABC, CBS, NBC, CNN; and the rest of the popular press want to deliver it.
- If the political system that governs our country is valid, then soon the populist perception will become the policy of the NPS. So be it; but do not, then, decry in the same breath, the vanishing 'wilderness' experience. Unless, of course, the public becomes educated - and still wants Disney World.
- Read carefully the news presentations and commentaries for the subtle tyranny that words work on the concept of our parks. Development is viewed by the NPS as vital. They are busy transforming the interior of the parks into the same kind of tourist slums that are represented by the 'gateway' villages.
- They are terrified of refusing millions of dollars - lest they offend Conoco, or Westinghouse, or Casio. So buildings are built that stress the skinny budgets. This is called improvement - not impact, or it's 'acceptable impact." Maybe Conoco needs educating too.
- We want it both ways. Drive to the park, call the roads access not impacts. Call th 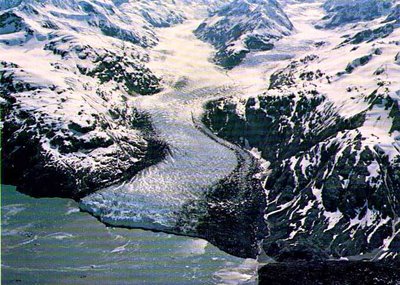 e hotels accommodations not impacts. Call the sewage treatment plants infrastructure not impacts. Call the parking lots necessary not impacts. The first rule of access is impact. No cute rationalization removes it. It can be large or small; terrible or benign, but it is impact.
- Now we have the interesting phrase of "Acceptable Impact." Of course the acceptability of any impact is culturally determined. If the culture continues to want their parks served up with a dose of cute hotels, fancy parking spots, developed campsites, etc. the range of "Acceptable Impacts" will grow. 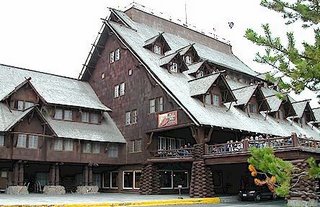 - Climb in your Sabru, drive to a park, sleep in a fancy hotel, eat a gourmet meal, flush the meal, visit an air conditioned visitor center, watch a movie about the park, decry the fires of '88, and call yourself environmentally friendly. After all you just "DID YELLOWSTONE." And the NPS helped.
Posted by Yellowstoner at Saturday, October 07, 2006