THE SACRED ELK OF YELLOWSTONE

Where The Buffalo Roam
And The Browse Disappears Everyday 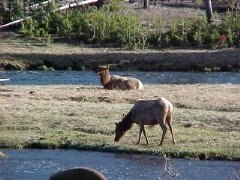 -- Yellowstone National Park attracts visitors from around the world. One of the big attractions is "watching animals." What they don't realize in their short stay is that the animals that they like to watch are eating the park to death.
-- It's not just Yellowstone that is disappearing into the gut of the elk. Rocky Mountain National Park is also being eaten alive.
-- In Yellowstone, the willows have disappeared along the Firehole river, along the Madison River, In the Haydon Valley, and along the Lamar River; to name a few. The elk have also nearly destroyed the largest groves of aspen in the park. They are also removing most of the native grasses, and have turned to eating the aquatic vegetation of the Madison River and the Firehole River.
-- The same is happening in Rocky Mountain National Park. Why does the National Park Service allow, and even encourage this destructive behavior. Why don't they tell the visiting public the truth about these critters?

-- The combined impact of the Sacred Elk, and the Sacred Buffalo is destroying the parks. Beaver are disappearing, erosion is accelerating, and many species as diverse as moose, pronghorn, sandhill cranes, and voles are being denied habitat.
-- There has been speculation that both parks are more interested in visitation than preserving the environment, or in public education.
-- In less than 40 years the northern range of Yellowstone has become a sagebrush wasteland. In less than 20 years the Firehole River has become devoid of bank-holding willows. In less than 10 years the bison have reduced the Madison Valley to a short grass meadow with no sheltering habitat, as the bison gnaw the grasses to the dirt.
-- Yellowstone needs to implement a comprehensive plan to save the environment before it's too late. Before the sacred elk and bison have nothing to eat at all. Before there are no more beavers, or sandhill cranes, or voles, or grass, or willows, or aspens. We wonder if anyone cares about grass, or willows, or sandhill cranes, or beaver, or moose, or voles.
Posted by Yellowstoner at Wednesday, June 07, 2006