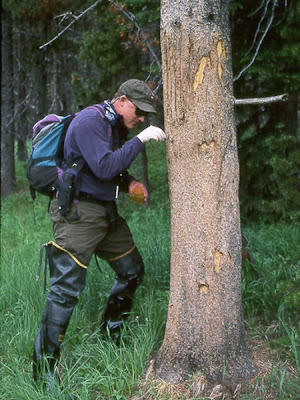 Travis Wyman of the National Park Service collects bear hair.
Photo courtesy Mark Harroldson.
.. Grizzly bear hair stored at Montana State University for over 25 years at -77.8 degrees will soon be headed to Canada. The hair collected from the bears in the Greater Yellowstone Ecosystem will be used to determine the genetic diversity of the grizzly bear population.
.. According to an MSU press release:

The hair will head to Canada in a few months to be analyzed at Wildlife Genetics International in Nelson, British Columbia, said Chuck Schwartz, head of the Interagency Grizzly Bear Study Team based at MSU. The team is monitoring the genetic diversity of the Yellowstone grizzlies over time and wants to know when new DNA appears. The team will also compare the Yellowstone bears with those in the Northern Continental Divide Ecosystem where a similar study has been done.

.. A major objective of the study is to determine if grizzly bears from the area around Glacier National Park migrate to Yellowstone National Park. The population of grizzly bears has doubled in the last 20 years to about 600 bears. This study will help determine the genetic diversity of the Yellowstone bears - and evaluate the general health of the gene pool.
.. The Canadian laboratory has analyzed bear hair from around the world, including Yosemite and Banff. According to Steven Kalinowski, a conservation geneticist at MSU:
Bear hair is tricky because the amount of DNA it contains is so small.
.. Jennifer Weldon, manager of the Canadian lab, said:

Dirty hair can challenge some researchers. So can hair that came from a dead animal and spent so much time in the elements that the DNA degraded.

.. After the DNA analysis the hair will be returned to MSU for additional study. 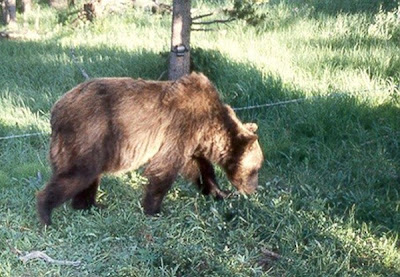