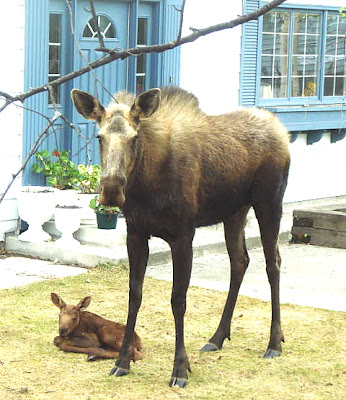 .. It seems that moose mamas are moving closer to roads in Yellowstone as calving time approaches. This provides the moose with protection from grizzly bears because the bears generally stay farther away from the roads than the moose.
.. Researchers have shown that the moose get closer to the roads over the years, while the bears stay substantially the same distance from the roads.
.. Of course the sub-text that is not talked about is that humans are depriving grizzly bears of a living just by being in Yellowstone National Park. Soon they'll be calving on your front door.
.. The Chinese view the situation this way. The folks in Denver see it this way.
=============

.. The NPS MORNING REPORT for yesterday details the history of a sex crime case against a concession employ at Old Faithful in Yellowstone National Park.
.. The case originated on June 18, 2007 and ended on September 27, 2007 when the federal district judge in Cheyenne, Wyoming ordered the suspect to be detained pending trial or plea agreement.
.. The alleged crimes involved computer pictures of young children in sexually explicit poses and activities. Read it in The Morning Report.

=============
.. The Bozeman Daily Chronicle reports the results of a trial of Dan Brister, 37, the Buffalo Field Campaign's project director.
.. Brister was convicted of a misdemeanor for obstructing a peace officer, fined $585, and sentenced to six months probation after the jury found him guilty. 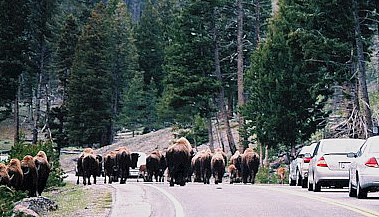 Posted by Yellowstoner at Thursday, October 11, 2007