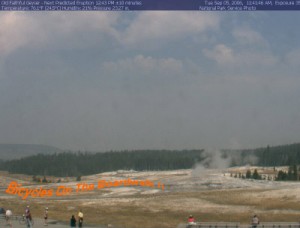 it's final adjustment and shows more of the geyser basin and less of the people on the boardwalk. It even shows most of the steam plume from an Old faithful Eruption. However, as shown in this NPS WEB CAM PHOTO, it doesn't, show so little of the boardwalk that the inconsiderate bicyclists can hide.
_____________
.. The Las Vegas Review Journal reports of a storm and flood and power outage in Death Valley National Park. Seems they got all of their rain at once this year - LINK.
____________ 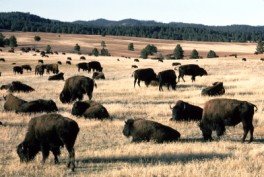 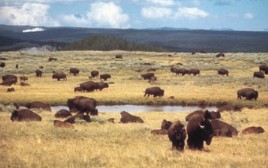 nps photos
The bison herd in Yellowstone National Park has reached it's management maximum. The summer 'count' places the herd at about 3,900. Depending on which management plan is being followed this week - the herd is either 500 bison too large, or just right. Advocates call the natural breeding cycle a "rebound." LINK A - LINK B.
_____________
.. The "picnic bear," (as the rangers are calling her,) and her cub are being monitored for aggressive behavior and habituation to human food. Careless visitors left food on a picnic table & the bears found it. Now the picnic area at Eleanor Lake is closed for humans. A second press release has been issued by the NPS.
____________ 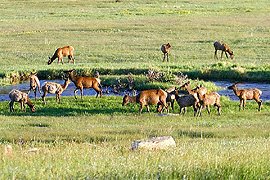 .. Rocky Mountain National Park is being eaten to death by the proliferating elk herd. They have even moved into town to chew on the golf course grass. The good citizens of Estes Park have lawn mowers for that. Now your National Park Service has promulgated rules to help them breed! No lights at night! LINK.
______________
.. Mary Bomar, President Bush's nominee for the 17th director of the National Park Service, is getting press reviews. Watch this process carefully because Washington has put 'the quiet' on 'the buzz.' 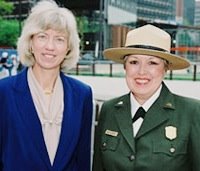 Good stories by the Philadelphia Inquirer, and GRIST.org.

.nps photo of Former Sec. Norton & Mary Bomar
________________
.. We can't help wondering how Director Bomar will react to the continuing development and privatization of the National Parks. Especially since:
". . . the very month the Park Service reasserted its commitment to park resources and values, it granted its seventh funding extension to the proposed developer of Fort Hancock, who wants to lease 36 old Army buildings for 60 years for bars, offices and restaurants, including what every park needs — a training school for stockbrokers. How these commercial activities square with national park "values" escapes me."
Quote from yesterday's Asbury Park Press.
Posted by Yellowstoner at Sunday, September 10, 2006